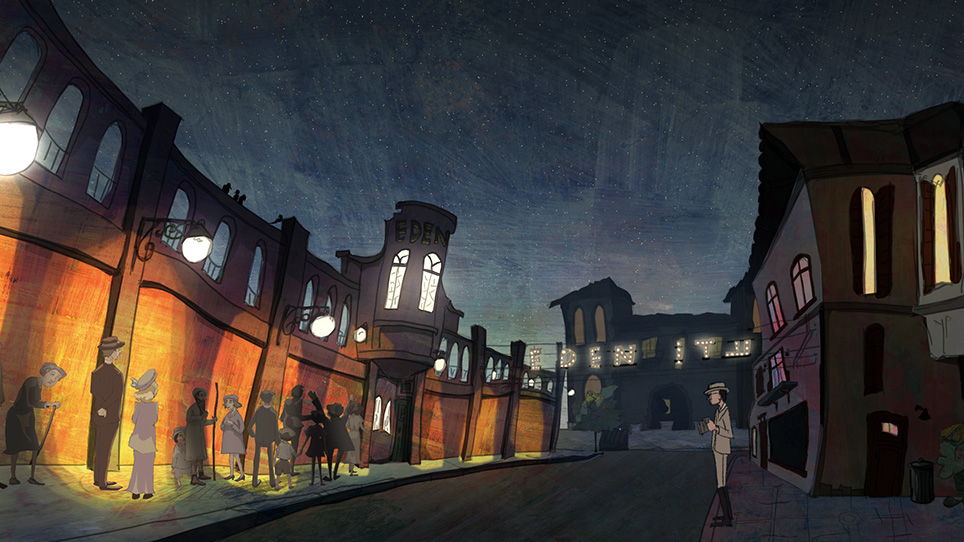 Short Film Showcase Under the Stars

An incredible mix of drama, comedy, animation, and documentary complete a unique collection of short films that reveal an independent perspective on our culture and world. Featuring a brilliant array of new stories, viewpoints, and filmmaking talent, these films serve as a proving ground for young filmmakers to make their mark and for established filmmakers to take risks in story and style.

The biblical tale of Isaac and his father is revisited through Guy Maddin’s expressionist style and immaculate adoration of silent cinema.

In New York City's diamond district, behind the glistening jewelry markets and through a maze of narrow corridors, sits a 92-year-old diamond cutter who is among the oldest in the ever-shrinking profession.

A lyrical short film riffing on Gregory Crewdson, David Lynch, and the whiles of a creative imagination.

In this whimsical animated short, Tel Aviv's history comes alive through teh story of the city's first cinema, The Eden.

A spirited 7-year-old, growing up in Dublin in the 1970's, is determined to join her friends for the sacrament of Holy Communion. The only problem is, she's Jewish.

Summer camp gets really strange for 15-year-old Lizzie when she is forced to play a Holocaust role-play game.

During a stormy night in the midst of WWII, a family faces a dramatic decision that will haunt them forever.

Layla’s hair is fed up with the silence and oppression she suffers, so one day it decides to disturb her resignation by drawing pictures reflective of her shackled life.

A man is sinking under the weight of his own memories. To survive, he must confront the question: what would we give up in order to keep on going?

Still in the aftermath of a tough break up, Paul's life is slowly deteriorating. A mindless burglary of his rented apartment forces him to push through the underworld of Tel Aviv to investigate.

Showing that there is always a reason to laugh, stand-up comic Reuben Stein (Elijah Wood) does the most daring set of his life. The consequences will change his life forever and allow him to discover the true nature of performance. Also starring Alia Shawkat.

When Esther pays her brother a visit, disagreements about how to spend their time together soon escalate into a much larger conflict.

A surprising story about loyalty and goodbyes between an elderly immigrant and his lively black dog.