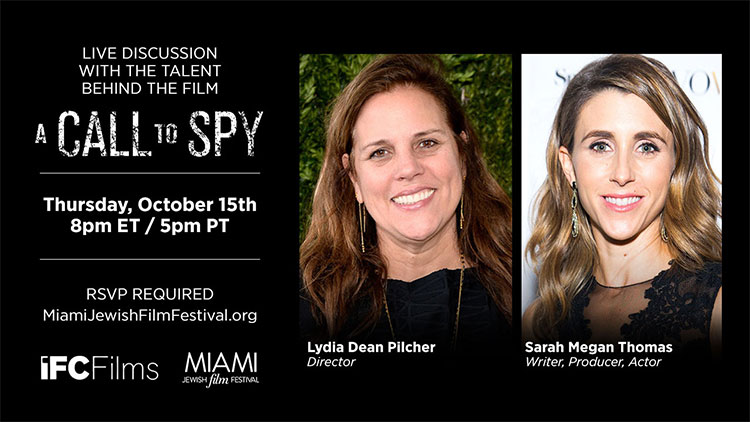 The Miami Jewish Film Festival is pleased to host a special conversation with Academy Award nominated filmmaker Lydia Dean Pilcher and writer, producer, actor Sarah Megan Thomas on Thursday, October 15 at 8pm to support the release of their new critically acclaimed film A Call to Spy. The online event is free and open to the public but advanced RSVP is required.

A Call to Spy is set at the dawn of World War II, when a desperate Winston Churchill orders his new spy agency to train women for covert operations. Together, these female agents help undermine the Nazi regime in France, leaving an unmistakable legacy in their wake. Those who have not yet seen A Call to Spy and would like to watch it before the online event can rent it at home by visiting the following website: acalltospymovie.com/watch-at-home

In these last several months as we have been challenged by the COVID-19 pandemic, the Miami Jewish Film Festival launched new initiatives and virtual platforms that offered audiences alternative forms of programming as a way to preserve strong community connection. As we continue to advance these efforts, we are thrilled to host this special online discussion for the newly released film A Call to Spy. This special event is made possible with the support of IFC Films and Mean Streets Management.